Cycling on the Mattamy National Velodrome with Steve Bauer and Curt Harnett.

With the help of Steve Bauer and Curt Harnett, CBC news reporter David Common takes a ride on the new Mattamy National Cycling Centre velodrome in Milton, Ontario. For a first timer, he looks good on his first ride on a velodrome. The track looks rather impressive made from ...Siberian hardwood and built for the upcoming Pan Am Games. The velodrome is the first ever UCI regulated indoor velodrome in Canada. Giuseppe Marinoni set the hour track record (75-79 age group), 35.728 km at the Montichiari velodrome, Italy. He plans to set the hour record, in the over 80 category, in 2017 at the Milton, Ontario velodrome. 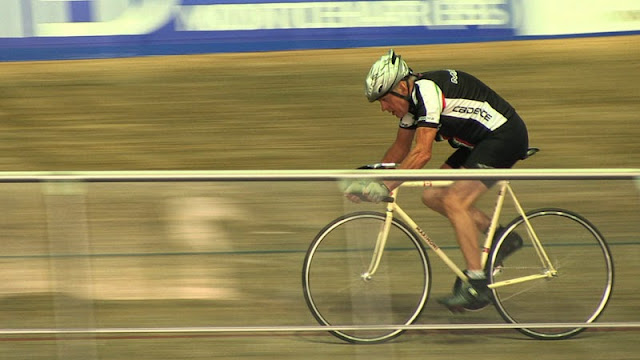 Pepe Marinoni smashing the hour record (35.728 km) on the same track bike
he made for Jocelyn Lovell, Oct. 20, 2012 Montichiari Velodrome.