The suffering gets worst and worst 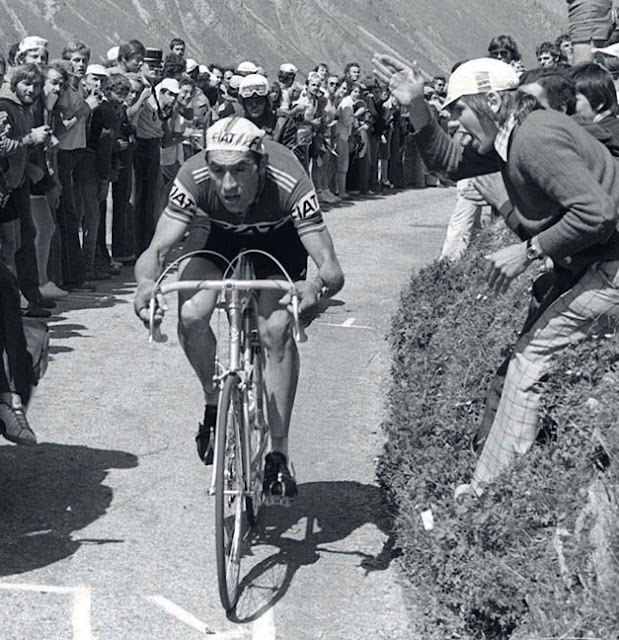 Knowing how to win and how to suffer:
Merckx labors alone up L'Alpe d'Huez.

Eddy Merckx entered the 1977 Tour de France with the goal to win his sixth Tour. After six seasons with Molteni he moved to the new FIAT team coached by Raphael Geminiani. As the race entered the Alps he started to lose big time. That's the Cannibal suffering up L'Alpe d'Huez losing thirteen minutes. No more the dominant Cannibal but still a mighty effort to finish his final Tour in sixth overall.


"After six years with Molteni, I moved to Fiat. It gave me extra motivation, and in the beginning things looked very promising, with overall victory in the Tour of Mediterranean. But then I had to pull out of Paris-Nice through illness. My body seemed to be able to offer less and less resistance to all the minor complaints. I also made the mistake of trying to do too much about it, with the result that I became increasingly susceptible to injuries and illness. In the Tour de France, it started getting better again. Together with some of my teammates, however, I was struck down with food poisoning.

In 1977, it had become fairly clear that I was not a robot but a human after all. For years I had been racing day in day out, summer and winter. With hindsight, I can say it was no more than was to be expected, I got what was coming to me."