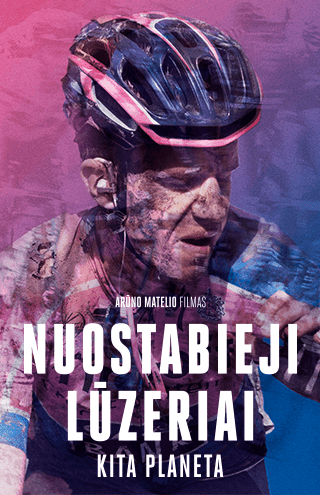 Wonderful Losers: A Different World keys on cycling's gregarios and features Canadian veteran and team worker Svein Tuft. This film is from Lithuanian filmmaker Arunas Matelis and keys in on the world of the riders who aren't fighting for the podium but passionately helping their teammates.

Could this be the ultimate documentary on the human condition in cycling? I can't wait to found out!

“For most of us, the cyclists riding at the back of a race are simply losers. They are called water carriers, domestiques, gregarios, who sacrifice their careers and forego personal victories so their team leaders can win. They have no chance of victory. What drives them on to keep putting their bodies on the line through excruciating pain and demoralising anonymity? Arunas Matelis followed these Sancho Panza’s of professional cycling for 7 years during the prestigious Giro d’Italia and revealed the unseen world from the point of view of the doctors’ team. Our bike heroes crash, rise — and race again.”
Chapeau! Classic Cool cycling nirvana Inspiration Svein Tuft tip of the cap video