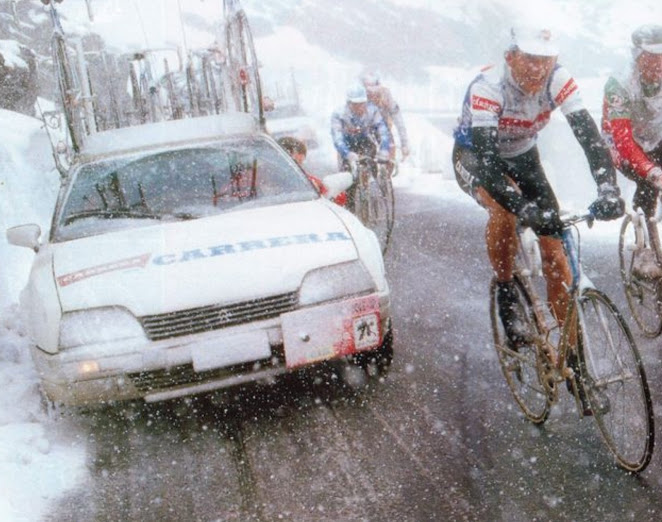 1988 Giro d’ltalia: If disc brakes were ever needed.

"There is a lot of trepidation about this stage both because of the climb and the weather."

"Everyone was freaked out. I mean, I'd already been shivering uncontrollably on the earlier descents. There was no sunshine - it was nothing but rain and snow all day. And yeah, some guys were saying, "Don't attack." The conditions were terrible. The riders really wanted to go slow and not race, but that wasn't happening.

I could see that everyone was terrified, so I just said to myself, "I'm going to do it. I'll save five per cent for the descent and go for it. I attacked right at the base because I could see that a lot of people were worried.

Psychologically, no one can explain how tough it was - 25km of descending in freezing snow and sleet. It was the hardest thing I've ever done. Everyone who crossed the finish line that day had to dig incredibly deep to get there. When I talk to the other riders today, it's never, "So and so did this," or "Yeah, Breukink won." It's, "Wow, you were on the Gavia in '88."