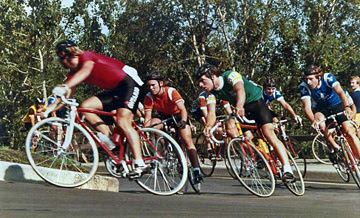 Photo by Ron Lee
I want to show this interesting pic of a very young, talented racer ... Steve Bauer! Canada's most successful road cyclist. Bauer is out in front, leading the pack of course, on his way to win the 1982 Canadian National Championships in Edmonton. Bauer would go on to win a remarkable three  National Road Championships in his career (1981, '82, '83). I was standing beside my brother Ron, who took this shot, as Bauer sped past us. Little did we know, that this red clad Ontarioian locomotive would win the race! He was on another level from the other riders, wearing a skinsuit like the old Soviet racers. His 'Maressi shoes' gave him that added class. I'm not sure of the make of his bike, but, it was painted red and white proudly emblazoned with the red maple leaf! Note the retro 'hairnets' on the riders! Even back then, he seemed to exude talent, authority and dominance to a race. He made it seem simple taking control of the race early on, leading it and by sheer will power beating the rest of the field to win, alone! Later, Bauer would win silver behind Britan's Malcolm Elliot at the 1982 Commonweath Games, Brisbane, Australia. He almost made the medals again, finishing 4th in both the 10 mile track & team pursuit race. And at the 1982 World's in Bruno, Czechoslovakia, Bauer came up 4th in the points race.

However, 1984 proved to be the turning point for the ambitious Canuck!
Canadian Road Championships Steve Bauer

Unknown said…
Bauer not only proved his strength as a rider, but he was also an unselfish teammate.

One of the lasting images I have is of him driving the breakaway to the base of L'Alpe d'Huez for teammates Greg LeMond and Bernard Hinault in 1986. He was a tireless domestic when called upon to fill that role.
January 19, 2008 at 10:39 AM