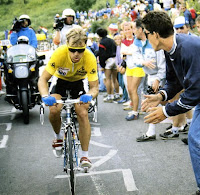 Steve Bauer started 1988 well with a new team (Weinmann/La Suisse/SMM Uster), with notable placings in high profile races...Ghent Wevelgem(6th), Paris Roubiax(8th), Amstel Gold(6th), Tour de Suisse(2nd overall, 1 stage win), Tour de I'Oise(1st), Dauphiné Libèré(1 stage), Trophea Pantalica(1st), and Etoile de Bésseges(1 stage). With these encouraging results... his year was going well. Bauer missed that year's Giro, planning the precious few weeks to rest up for the upcoming Tour de France.
He was coming off from a good 1987 season; with a stage win in the Criterium International, Giro d'Italia (10th overall, 2nd in the Prologue - 1 second behind Visentini.), but, finishing a disappointing 74th in the Tour. During that Tour, he caught a stomach bug but manage to claw his way back on the last stage into Paris, missing by a fraction of a second to catch stage winner, Jeff Pierce. Swiss coach Paul Köechil always believed in Bauer, and left Tapie's French La Vie Claire to form a Swiss based squad to help him achieve victory. Weinmann-La Suisse had a good team and included top Swiss rider's Nikki Ruttiman and the world champion, Pascal Richard.
The Swiss team was given a rather pleasant surprise during the 1st stage, Pontchäteau-Machecoul, Bauer took the initiative and 7 miles from the finish took the catch sprint, the solo stage win and the yellow jersey! He was the second Canadian(Alex Steida in 1986) ever to wear the yellow jersey and the first to win a stage. Now, Bauer led the green and the combine jersey classifications. However, in the afternoon's time trial was won by Panasonic and the maillot jaune changed hands to Teun Van Vliet. The ever surprising Weinmann-La Suisse squad took second, only 24 seconds behind. Bauer had alot of fight in him and during stage 8, Reims-Nancy, recaptured the yellow jersey. He held on to it another 4 stages, right to the start of the monster stage 12, Morzine-L'Alpe D'Huez. The yellow jersey turns good riders to excellent ones and Bauer was no exception. He fought his way to the main bunch of chasers with Herrera, Theunisse, and Parra. Dutchman Steve Rooks would go on for the famous win, splendidly alone, in front of Theunisse and Delgado. And, Bauer would turn in an amazing 7th place beating mountain goats; Hampsten, Pino and Arroyo.
On to Stage 13, the mountain time trial, Grenoble-Villard de Lans, (38km) was ridden over 3,000 ft. at 22 mph by Delgado in the winning time of 1hour 2 mins 24 secs. Bauer rode like a man posscessed, finished a brilliant 6th and leap frogged over Parra to 3rd overall. Then, scandal broke ... Pedro Delgado tested positive for probenecide, a masking agent for steroid use. Probenecide was banned by the International Olympic Committee (IOC), but not yet by the Union Cycliste International(UCI). Though skepticism ensued, Delgado was the strongest and continued faithfully racing winning the 1988 Tour. Bauer led an outstanding Weinmann-La Suisse team(4th overall team classification) and with great panache finished in 4th overall, 1 stage win, 10th in points classification and 5 days in le maillot jaune.
Steve Bauer's performance was to say the very least ... golden!

Coming soon:  The darkside of the rainbow, part 5 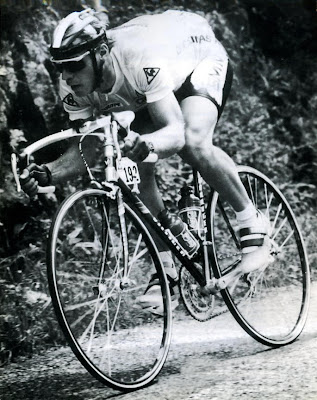