The bedouin, a Tour legend

The 1950 Tour de France marked the addition of the North African National Team. Abdel-Kader Zaaf, nicknamed 'the bedouin', was the Algerian leader and a very good rider.
Zaaf had won the 1950 Tour of Morocco, ridden in the Tour of Switzerland and Tour de France. He rode for professional teams; Volta, Duralca, and Terrot-Wolber. During the sweltering, hot stage 13 from Perpignan to Nimes, the overheated peloton literally jumped into the Mediterranean at St. Tropez to cool off. Meanwhile, the two North Africans Zaaf and his fellow countryman Marcel Molines saw this as the opportunity and took off. They did well, at one point gaining 20 minutes on the surprised peloton and Zaaf was the maillot jaune on the road. Molines would go on to the win Africas first Tour stage. About 12 miles from Nimes, Zaaf cracked and passed out under a tree. He awoke before a startled crowd and a stunned Zaaf got back on his bike and rode... the wrong way. Officials placed him into an ambulance. This is where Tour legend has a way with perpetrating folk tales. Some of the stories speak of sunstroke, 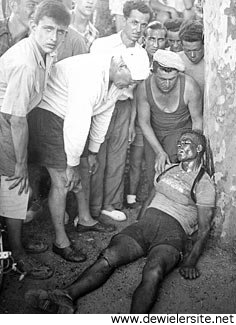 dehydration, confusion, drugs and been revived with red wine.
I find it hard to believe that as a Muslim he would drink and allow himself to be intoxicated on red wine. In any case, he became an instant celebrity and his start money rose from 200 to 2,000 francs. Big money for that time. A year later, he would go on to ride and finish 66th and Lanterne rouge in the 1951 Tour. Then he vanished from cycling to return back to his native Algeria.
Thirty years later, in January of 1982 he was discovered in Paris and he had quite a story to tell. One night a soldier knocked on his door in Algeria, demanding his papers. Zaaf refused and was shot in the leg. He was tossed in prison for two years, his leg left untreated, suspected of smuggling between Algeria and France. Most of what he had was gone except some money. He developed diabetes and came back to Paris for an eye operation. When fans learned of this, warming from his exploits from the Tour, sent him telegrams and money. Four years later, he died in Alger, Algeria, on September 27th, 1986 at 69 years old... a Tour legend!
Vintage Tour de France