Save this last dance for me, Madame De Kova. 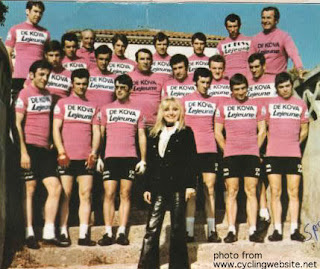 During the early days of cycling, sponsorship came from some unlikely non-bicycling sources. Famous drink companies; Carpano, Martini, Pelforth, St. Raphaël, and Margnat were fronting some of the peloton's strongest teams. Cigarette companies, a Catholic radio station, a toothpaste producer, ice cream manufacturers were but just a few of the backers, however, one odd sponsor stood out.
A Parisian night club entertainer, Myriam De Kova wanted to promote herself...as a dancer. She already proved a point with her pink jerseys. Her Greek millionaire husband died and De Kova had become a wealthy widow. Already in her 70's, the eccentric De Kova was introduced to the charismatic Raphaël Géminiani who persuaded her to form a team. Géminiani had a very good cycling career winning the Tour's mountain's jersey in '51, '52 and '57. However, his other success was selling cycling to the St. Raphaël apéritif company and thus introducing sponsorship.
For the 1973 Tour de France, the De Kova-Lejeune team was formed under the leadership of former Tour winner, Lucien Aimar. Aimar was in his last professional season and at the ripe age of 32 wanted one last kick at the can. In fact, he rode in 9 Tours, finishing in 17th place - 3 times! The De Kova-Lejeune squad finished a dismal last during the team time trial stage and throughout the race, Aimar was left without strong support. At the end of this Tour, the last 5 places in the general classification was occupied by De Kova-Lejeune riders! Frenchman, Aimar would finish his last Tour in an honorable 17th place. His cycling career would end the same year and he would go on to become race organizer of the Tour de Méditerranéen. As for Myriam de Kova, due to the poor results in that tour she stopped financing the team and disappeared from the cycling world.
This was her final performance on the cycling stage.
Vintage Tour de France