on February 09, 2008
I was transporting my old stereo speakers and tuner/amp to my  friend, Peter, today. And, I saw a cargo bicycle down Main Street! I've seen many bikes in my time, but, this was a first. The only thing I regret was not packing my camera. It was very euro chic cool,  coasting  well  on semi wet roads. This may have to do with the new bike store, that I past by to work every morning, on Manitoba and Broadway Streets. I checked the internet and it's called, "bakfiets", a dutch cargo bike, pronounced, "back feet". Very popular in most countries in Europe(especially Holland), the United States and hopefully here in Vancouver, it just makes sense.
It reminds me a little of the "dépaneur" (convenient store) bikes in Montréal. These steel bikes equipped with a heavy metal basket are primary used for delivering large amount's of "La Fin de Monde beer."  Smart.  The bakfiets are also very utilitarian, great for delivering mostly "anything" ... and a bicycle I wouldn't mind using! 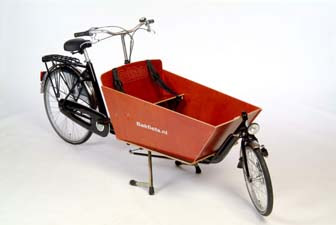 Brian Park said…
Hey there, glad you like the Bakfiets. I sell them at Rain City Bikes here in Van, and they're so much fun. A bit much for getting 300 lbs of beer up Mt. Pleasant, but still insanely useful.

Come by our new shop at 2518 Manitoba st (at Broadway) and check them out. We'll be reopening in about a week.