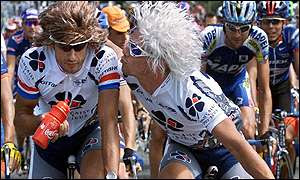 French rider , Jimmy Casper is 29 years old, in his 9th pro season with the Agritubel cycling team. In case you folks didn’t know, Agritubel is a well known French base agricultural machinery maker.

Casper is well known to his teammates as the clown. Making jokes, keeping spirits high, and giving a big boost to team morale. He laughs in the face of adversity, someone you’d like on the team, a leveler in any stressful cycling situation. But he also has an underlying seriousness. Casper is a damn fast sprinter willing to go toe to toe with kamikaze like ferocity with anyone willing to take him on. He’s won a sprint stage in the 2006 Tour. And, recently sprinted to victory taking stage 2 during this year’s Tour Méditerranéen. Casper has become somewhat of an expert at sizing the last 3000m of a stage to memory. He's a clever race tactician, even identifying every closing detail of the terrain.

Bulldog tough is another sprinters’ characteristic he embodies well. He’s infamously known for his frightful face plant which resulted in severe facial lascerations and a broken cheekbone at the 2007 Gent Wevelgem. (I’ll spare you the gory picture!) 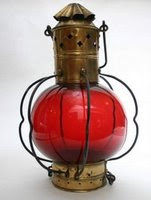 d two Lantern Rouges as last place finisher in the Tour de France(2001, 2004). In fact, during the last day of the race in the 2004 Tour, Casper carried a small red lantern seeking publicity and post Tour business opportunities. Lantern Rouge is French refering to the red lantern on the caboose of a train. In years gone by, potential winners would go so far as to hide behind buildings, coast along race routes or fake injury in order to be last. The popular lantern rouge ‘winner’ would receive a sizable sum of appearance money to compete in the lucrative post Tour criteriums. Today, the Tour’s last rider receives no prize money only a special distinction of admiration.

One things for sure, if Jimmy Casper rides this July’s Tour, no one can bet against him for another stage victory or perhaps ‘winning’ a record 3rd Lantern Rouge.
I hope he gets both … along with a few yuks on the side!
Top photo: Jimmy Casper(white wig) yuking it up with his teammate at the 2001 Tour.
www.news.bbc.co.uk