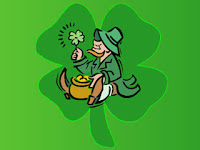 Today is St. Patrick’s Day and the 4 leaf clover goes to 36 year old Davide Rebellin(Gerolsteiner), the winner of the 2008 Paris-Nice. I like how the old man of the classics toughed it out to win. Yesterday, he made a go at the 3 cat. 1 climbs and batted away attacks to finish the final stage into Nice in 16th place. He won the Race to the Sun by 3 seconds over Rinaldo Nocentini (Ag2r), the smallest margin in the history of the race.

The Italian Rebellin is a true classic specialist with a fine list of palmarès. He maintained his cool and with the steady support from his team wore the yellow jersey into Nice. Kudos to Dutchman, Robert Gesink (4th overall/winner of the white youth jersey, Radobank) who from lack of experience lost the yellow jersey to Rebellin with two stages left. Double kudos to young French hopeful Clém

ent Lhôtellerie (11th overall, Skil-Shimano) winner of the polka-dot climber’s jersey. These two young guys have a good future ahead of them. The green sprinter’s jersey goes to Norwegian tough guy, Thor Hushovd(Crédit Agricole). Rebellin finished on the Paris-Nice podium three times; second twice (2004 and 2007) and third once (2003). He has the luck of the Irish with him and deservedly earns the 4 leaf clover. His fourth time at the podium gave him the win.
There’s no reason for him not to make another stab for victory in this year’s Amstel Gold, Flèche Wallonne and Liège-Bastogne-Liège!