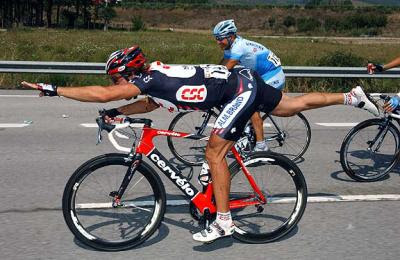 Swiss time trialing monster, Fabian Cancellara wears the overall maglia azurra to claim victory in the 43rd Tirreno-Adriatico. Not a surprise, as the mighty Team CSC took control to give Cancellara his 27th birthday gift! He finished just 16 secs from second place, Italian Enrico Gasparotto(Barloworld). Canadian Champion, Ryder Hesjedal(Slipstream Chipotle) finished a highly respectable 8th, 1min 53secs behind. Italian Francesco Chicchi outsprinted a mass of riders to win the rain drenched final stage of T-A.
After this big win, folks say that Cancellara is in line for a crack at Milan-San Remo victory. “We’ve got a strong team and Frank Schleck could also win so we’ve got several cards we could play.” he hinted. There’s a touch of modesty in his words and with such a strong team, any of these two could crack the top five!

News Flash! The Lion King exits as fast as he started on the US-based Rock Racing team. As the hype continued, clouds formed and you just thought it was too good to be true. It did looked good for Cipo, way back in February, coming out of retirement to ride in the Tour of California.
More rumors as Cipo wanted to get off the ‘Rock’ and jump ship to Tinkoff Credit Systems for a chance to celebrate his 41st birthday and ride this Saturday’s Milan-San Remo. Super Mario said that he only wanted to be involved with a team in its management and development.
Bike love! A dilemma if he does ride for Tinkoff ... There might be another issue in that the Tinkoff's ride Colnago's and Super Mario wants to ride his own. And, just to make it interesting, with La Classica di Primavera fast approaching, don't blink if you see the old lion king at the start line.
All said and done, (and I won’t rest until it’s really over) it’s best to finally put your paw down and exit, right Lion King?
Photo(above): Cipo, is this your final exit?
(top): Cancellara, riding in the right direction to victory.
Tirreno-Adriatico