'Killer' of a hill

The riders that endured the brutal 20% grade up the final climb into Montelupone looked like twisted rag dolls. The pictures proved this. And, who said that Tirreno-Adriatico (Race of the two Seas) is a relatively flat race? Say that to any of the riders and they would probably give you a 'claque dans face' (punch in the face).

The climb looked gruesomely familiar from another famous race; the staggering climb up the Muy de Huy in the Flèche Wallonne classic. The anguish faces on the riders showed the severity of the grade with many walking the last 200 meters. Controversial 2007 Giro winner Danilo 'the Killer' Di Luca, clawed his way up to finish a superb 2nd. He's surrounded in a cloud of controversy as he maybe banned for two years from the Italian Olympic Committee for his doping test he took after the 17th stage in last year's Giro. I think this was furthest on his mind as his new LPR team helped him to his excellent stage finish.

Nice stage win for Spanish Champion, Joaquim Rodriquez as he rockets to 3rd overall. Veteran, Niklas Axelsson finished just behind the Killer and now wears the leader's maglia azzura. One rider that looks menacing is Fabian Cancellara who finished in a well placed 10th. He looks a hot favorite to win the upcoming time trail. The Cobra, Riccardo Riccò looked the worst as he limped in bloodied after a fall. He's back in 82nd overall. Young Canadian, Ryder Hesjedal is riding a good race, too. He came in 16th and was top Slipstreamer. He definitely took advantage of his mountain biking skills to attack that 20% grade. Now he's sitting in 13th overall just a minute behind.
The race is not over until Tuesday and one can't help but think that there's more suffering to come! 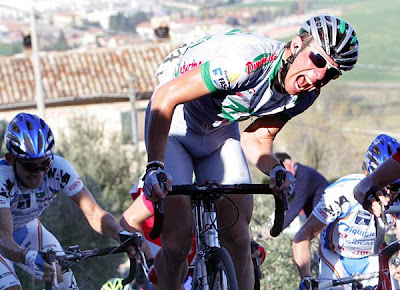 Photos: (top) The 'Cobra', Riccò ... bloodied but unbowed. (middle) At the finish, the damaged is done. (above) The suffering continues.
www.cyclingnews.com
Ryder Hesjedal Tirreno-Adriatico