The Race to the Sun ... without the politics, please!

Tomorrow starts the first stage race of the season ... the 66th edition of Paris-Nice. It's a 7 stage race, including sprint stages and challenging climbs ending in the frenzy run onto the Promenade des Anglais in Nice.
I don't want to mention the crazy politics going into the race ... so I won't! But, what I want to comment is that for the first time in twenty years, the géant du Provence - Mount Ventoux will be included. And, the 4.6 km prologue will not start in the suburbs of beautiful Paris but, in Amilly - in the Loire Valley. The 3rd stage from Fleurie to Saint-Etienne will be brutish consisting of 5 climbs. And the 176 km stage 4, Mortélimar to Mont Ventoux will be very interesting. You may remember that 7 time Paris-Nice victor(1982-88), Sean Kelly rode up the fabled extinct volcano back in 1987 and won the summit finish.
In 1977, Kelly's first year as a pro saw him at Paris-Nice in a role of lead out man for the super sprinter, Freddy Maertens. That year, the Orge won ... with the help of Kelly. 'King Kong Kelly' further developed his famous 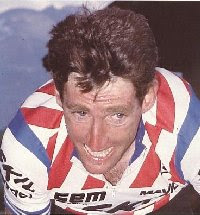 speed with the Jean De Gribaldy teams of the early eighties. They were: Sem-France Loire, Skil-Sem and KAS. Under the tutelage of De Gribaldy he hone his sprinting, time trialing, and climbing skills needed to win 'the race to the sun.' He did it an amazing seven times in a row. A record that will never be broken!
A reporter once said, "Paris-Nice suited Sean Kelly - the tough farmer's boy from Curraghduff like a callused hand in workman's glove."
Let's look at Kelly's time-trialing bike during his 7 victories... For the climb up the Col d'Eze, a 44 or 45 inner ring with a 13 straight up block was used, in titanium of course. De Gribaldy was weight conscious on the time trial bikes. Using titanium bolts to replace the steel ones; the seatpin & the stem bolts. Clement silk track tyres were used on 24 spoke wheels. "His attention to weight saving was as much for the riders as it was for the bikes. He realised that any weight you could save would make you go faster uphill," explained Kelly.
Barring any 'problems', Team CSC looks a good bet to lead an overall winner. After my fairly good prediction on Het Volk, I picked Thor Hushovd who eventually came in 3rd.
Politics aside, I'm going for CSC's Frank Schleck(brother Andy's not in) for the overall victory. But one cannot forget the astounding 7 victories of King Kelly!
(photo): The tough farmer's son from Curraghduff.
www.dewielersite.net
Paris-Nice Sean Kelly