Not a surprise that Tonio was the fastest over the cobbles! 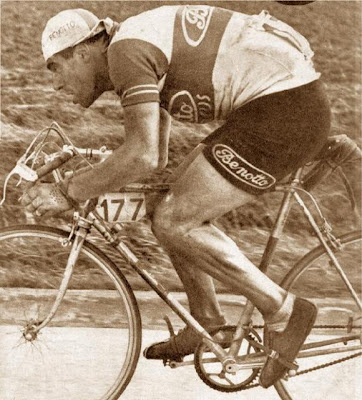 Champion form of the great Italian pursuit racer, Antonio 'Tonio' Bevilacqua(Benotto-Ursus) on his way to victory at the 1951 Paris-Roubaix. His track palmares were many but, during this particularly dry edition of Hell he just put it in his 50x14 gear and hammer all the way to the finish. He was going over 40 kilometers an hour over the dry cobbles, ripe conditions for a world champion pursuit specialist. Although they finished second & third respectively, contender's Louison Bobet and Rik Van Steenbergen never had a chance. Bobet and Van Steenbergen were good track racers in their own right, but, Tonio was the gifted of the trio. He won many medal's on the track and, in the same year, had the distinction of being World & Italian Pursuit Champion.
An exercise in power ... the Italian pursuit specialist at his best!
(photo): www.wooljersey.com
Paris-Roubaix The Monuments