The Lion of Flanders callin' 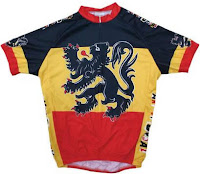 This Sunday's Tour of Flanders is the eagerly awaited 2nd 'monument' of the classics. The crazed Belgian fans are hoping for one of their own rider's to win. With Milan-San Remo over, next up is; the Tour of Flanders(Ronde van Vlaanderen), Paris-Roubaix, Liege-Bastogne-Liege, and the Giro di Lombardia. Belgian tough guys; Merckx, De Vlaeminck, and Van Looy have won all five 'Monument' one day races.
Often compare with Paris-Roubaix, the 'Ronde' also has cobble sections but unlike the flat 'Hell of the North', has many steep hills. The riders pain threshold will multiply as they climb up the many hills. Good for the cheering fans. Because that's where the painful expressions of the rider's can vividly be seen. A racer's not a hero until they can suffer!
The first edition, way back in 1913, was won by the Belgian spy, Paul Deman (See my January's post, 'Secret Agent Man'). Last year's Italian winner, Alessandro Ballan is back to defend his title.
Not so! If the Belgian riders have anything to say! 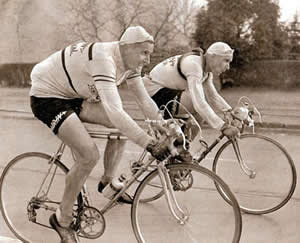 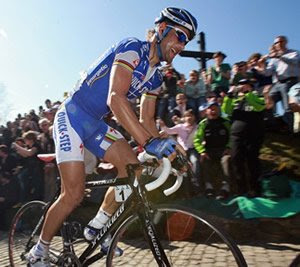 The machines are different but the riders have the same determination!
(Top photo): 'Ronde,' 1953. Wim Van Est(r) will win in front of teammate, Désiré Keteleer. Wool jersey's, tyres, steel frames but no helmets! From: www.wooljersey.com
(right): Contender, 'Torpedo' Tom Boonen. The new Belgian hero of the classics has won the 'Ronde' twice. (2005 & 2006)
From: www.daylife.com

The Monuments Tour of Flanders