Eddy Merckx's third and final treble in the 1973 'Hell of the North' was no easy plight. He discovered that this race was harder than his two previous victories. He fell when a press motorcycle got entangle with his bike. And, riding for the Italian Molteni team, he sped away from De Vlaeminck with 47 kilometers left. The Cannibal maintained his dominance and after a few close calls he crossed the line to win by 2 minutes, 20 seconds. His victims were Walter Godefroot and Roger Rosiers some 2 minutes and 20 seconds behind!
(left): So, this is what the view looks like in second. (Presse Sports) 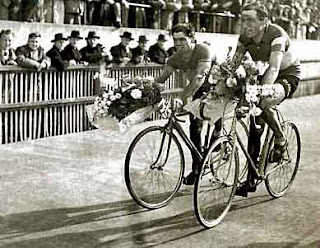 Fausto Coppi was a pioneer at introducing new equipment during his races. The Campionissimo tried a new Campagnolo derailleur without jockey wheels and pushing a huge gear of 52 X 15 broke away to win alone in the 1950 Hell of the North. Frenchman, Maurice Diot trailed in next by 2 minutes and 40 seconds.
Diot was so estactic to finish behind the Campionissimo that he remarked, "I'm thrilled to have won!"
(above): After the finish. Diot & the Campionissimo enjoying their 'wins.' (Presse Sports) 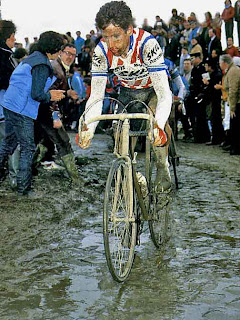 Sean Kelly knew how to win, he was so strong that during the eighties racked up many classic wins. Nineteen eighty-four was no different as he entered the Hell of the North as the favorite. King Kong Kelly took control of the race along with the Belgian, Rudy Rogiers. As they entered the velodrome Kelly decided Rogiers fate by easily sprinting past him. His first Paris-Roubaix. The second would come in 1986.
And when the tireless Kelly was asked how he handled fatigue? He said, "It's a mind game. You only get tired when you're holed up in some hotel room and have time to think about it."

Slip sliding in the muck. Kelly at home in the muddy confines of Roubaix, 1984. His first win awaits him! (Photosport)
Eddy Merckx Paris-Roubaix