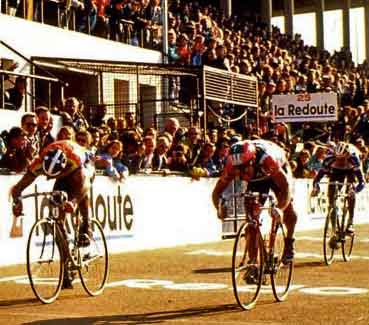 With a week to go, here's another story from Hell.
Steve Bauer rode a perfectly tactical race, keeping 2 riders at bay in the last few kilometers of the 1990 Paris-Roubaix.
A Canadian against two Belgians slugging it out in the Queen of the Classics?
You bet!
The trio looked good consisting of; a very strong Bauer(7-Eleven), Eddy Planckert(Panasonic) and Edwig van Hooydonck(Buckler). A rider of 'classic' proportions, Bauer had the build necessary to compete over the dreaded cobbles. He wasn't nicknamed, "Gros cul"(big butt), for nothing. And, along with his keen preparation, Bauer was a rider to be reckoned with over the cobbles. He had very good results, in 1988(8th) and in 1989(4th).

"I knew this was a bike race I had to excel at. I was built perfectly for it. You had to be supple, relaxed, upper body floating, hands totally loose on the bars, all the power coming from the waist down," Bauer said.

With about 30 km’s left, Bauer was in the chase group containing a very fit Laurent Fignon. They were chasing Planckert’s lead group when Bauer bolted off and attacked solo. “ I gave everything I had in the attack, leaving everyone except Eddy P glued to my wheel and Van Hooydonck struggling to stay with us,” added Bauer.

The Canadian felt good and periodically attacked Planckert, but he couldn’t shake him off. As the trio entered into the Velodrome, 3 other riders caught them. They were Wampers(the 1989 winner, Panasonic), Gayant(Toshiba), and Duclos-Lasalle(Z).
Suddenly, Bauer blew past the other’s with only Planckert beside him. As they sprinted for the line, Bauer threw his bike… “After crossing the line Bauer and I looked at each other. Neither of us knew who had won,” said the astonish Planckert. Officials looked at giving both riders the win but they knew a draw wouldn’t be popular. In the end, they gave it to Planckert by a cm! This is the closest finish in Paris-Roubiax history.
For Steve Bauer, he came ever so close to winning a Monument. Sadly, he would never have another chance.
(photo): Bauer(middle), Planckert(left) just about to make history. I screamed when Bauer lost!
Paris-Roubaix Steve Bauer The Monuments