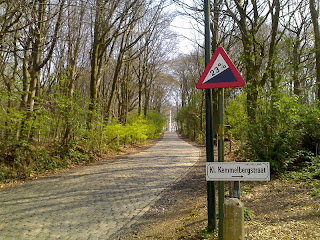 Tomorrow is the Ghent-Wevelgem race. And, as I discovered, the Kemmelberg will be the 'star' of the race.

The 209 km semi-classic race, first held in 1934, has the importance of being nestled between the Ronde and Paris-Roubaix. The uniqueness being; a classic race held on a weekday and so flat that it's tailored made for the hardcore sprinters. Of course, just taking part is not enough as the riders must contend with the dreaded Kemmelberg cobbled climb, not once but twice!
Difficult to climb, a 1:5 gradient, extremely hard going on the descent. Riders panic, bones are broken, skin is ripped and riders' safety are compromised. Yes, crashes that can send fans scurrying for cover and leaving one masked in fright as riders fall terribly on the descent. I saw the painful skin shredding video of Jimmy Casper's face plant of last year's race and I did cover my mouth in shock!
With heavy accidents occurring, growing concern of whether to keep the Kemmelberg in the race surfaced. In the 2007 Three Days of De Panne, the climb was left out after a strike was staged by the riders.
For tomorow's climb, to lessen the bunching effect of riders, organisers added 2.5 km of cobbles before the Kemmel. And, at the top, instead of the severity of cobbles, an asphalt track of road is added.
I'll just stick to the Kemmelberg and the old expression, "with no pain, there's no gain" and pick tough guys, Thor Hushovd to battle Juan Antonio Flecha for the honors!
Gent Wevelgem