Luxembourg National Champion, Charly Gaul on his way to winning stage 18 on Mount Ventoux, 1958 Tdf.
From: 'Maillot Jaune.'
Luxembourger, Frank Schleck can feel a quiet confidence wearing the yellow jersey. After stage 15, and holding a slim 7 second lead over second place, KOM Bernhard Kohl the race is heating up in the Alps. Fifty years ago the great Luxembourger, Charly Gaul created an spectacular ride to win the 1958 Tour...
Charly Gaul already had the strength to win the time trials: first in the downpour of Chateaulin(stage 8), on the bald mountain of Mt. Ventoux(stage 18) where he defeated Federico Bahamontes. Then came stage 20, Briancon-Aix-les-Bains as the weather turned an icy windy rain on the Col de Luitell, Gaul reign supreme. He did so with a climbing finesse that most riders were incapable of. As the weather turned fouler in the mountains, Gaul seemed to go faster. And he loved it!
The other favorites; Geminiani and Anquetil were exhausted with cold and would lose huge amounts of time. Geminiani lost over 15 minutes while Anquetil finished 23 minutes behind. Many riders came in over an hour later. An memorable day that put the magnificent Charly Gaul in contention for overall victory. He won four stages including all three time trials and the coveted Yellow Jersey. No wonder he was called, 'the angel of the mountains!'
Can compatriot Frank Schleck do the same? He has the Maillot Jaune. And, he's shown that he could climb well with his l'Alpe d'Huez win at the 2006 Tour. The monster climbs in the Alps are due including l'Alpe d'Huez. And with the final time trail coming up this week ... it can't be impossible. Can it? 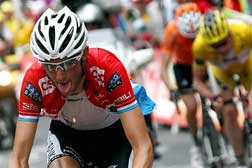