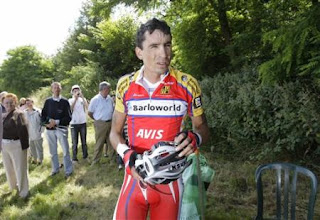 Déjè vu?
Force to withdrawal. Soler gets ready for his team car on Stage 5, Cholet-Chateauroux.
My favorite,  for the maillot à pois rouges competition, Mauricio Soler  abandon during stage 5. After riding with a broken wrist and a arm injury from a fall on stage 1 the Colombian grimpeur will not defend his 2007 KOM jersey. Give him credit for staying in the race up until now. He skirted with the Lanterne Rouge and finished very close to the bottom of the overall standings. To make matters worst, Soler fell off his bike at the start of the 5th stage thus provoking his withdrawl. He rode only 11 km stopped and retire from the Tour. Even holding his handlebars was a study in pain. This year's Giro started his woes as he was forced to retire after his fall. Unlucky again, as he exits from  the Tour. He's reported to go to Italy for treatment and then to reexamine his season. Good luck to him.
I'm sure he'll once again be back on top! 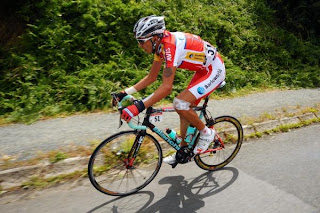