The winners for aggressive tendencies goes to... 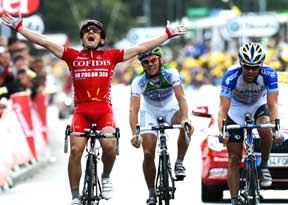 1. Honourable aggression award goes to Frenchmen: Samuel Dumoulin(Cofidis/stage winner) & Romain Feillu(Agritubel/Maillot Jaune). Will Frischkorn(far left) nearly misses out for stage victory nirvana. His aggressive tendencies will put Garmin-Chipotle first in team classification and he'll receive the most aggressive rider prize!
www.velonews.com
2. Garmin-Chipotle is having a heck of Tour. A close second place by Tour rookie, Will Frischkorn almost gave the team it's first stage win. But, It landed the American  the most aggressive rider prize and he will have a special red bib for the Tuesday's time trial. With his hard work, Garmin-Chipotle moves up to first place in the team classification.  The team will have special yellow bibs highlighting their numbers. 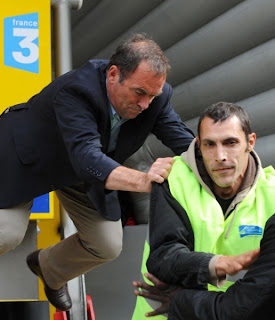 The badger lunges for the kill. This protester will soon be nullified.
www.velonews.com
3. Prize presenter, Bernard Hinault made quite an aggressive move today  by showing his claws. As stage winner Samuel Dumoulin mounted the podium a protester jumped in front him. Little did he know that the badger reacted rather quickly  and shoved his victim off the stage.
I'm enjoying this Tour!
Bernard Hinault Tour de France