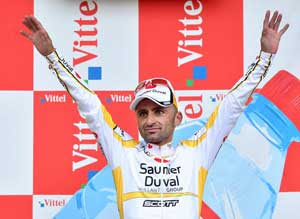 Piepoli's first Tour stage win and feeling very high!
Stage 10, Pau to Hautacom.
It was another  fine display of riding from Saunier-Duval grimpeurs, Leonardo Piepoli and Juan Cobo Acebo finished an amazing one two. By the way, Leonardo Piepoli is the oldest rider of the team and at 36 year old prove that he is among the world's climbing elite. Light as a feather he weights in  at 110 Ibs standing 5 foot 8, the perfect grimpeur. And in a way this was fantastic to see the Italian climber beat out the younger guys. Only Frank Schleck (Saxon) could stay with the Saunier mountain goats. But with 2-3 kms left he cracked and Piepoli went to solo victory urging on Acebo for a close second.
Piepoli is not unknown to the mountains. At last year's Giro he won the Maglia Verde as best climber. And during the 2007  Vuelta a España, having won stage 9 only to pull out to be at the bedside of his wife who suffered complications during birth. By the way, Mother and son are well.
There's  hope for all of us older guys  and I'm optimistic  for one of my favorites, Erik Zabel (38 years old) for a sprint win.  How about tough man, Jens Voigt (36) for a win? And with the Alps glistening, a Piepoli double is not far off.
One for the old guys! 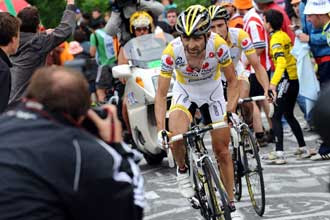 Piepoli & Acebo getting down to business. 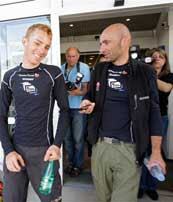 The towers of power; stage winners Ricco & Piepoli on rest day in Pau.
All from:  http://sports.yahoo.com
Grimpeurs Tour de France