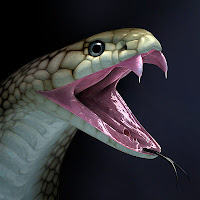 When will the Cobra struck next?
The Cobra struck again, winning todays mountainous stage 9. No one but no one could stop him from sinking his fangs into the 1489 meter high Col d'Aspin. The plucky 24 year old  grimpeur chased and tossed aside the lone leader,  Sebastian Lang(Gerolsteiner) 1.1 kilometers to the top of the Col d'Aspin. Powered past him, making him look like a lifeless rag doll.  Then the Cobra time trialed all the way to finish  alone into Bagneres-de-Bigorre. Riccò's ride was legendary like another Italian climber, the late great Marco Pantani. The stage 6 win into Super-Besse was Riccò's first Tour stage victory and now with this one he ties his two 2008 Giro stage wins. Tomorrow's big climb to the Tourmalet & Hautacam will be a huge challenge for all the riders and I bet that the Cobra is ready to strike again! 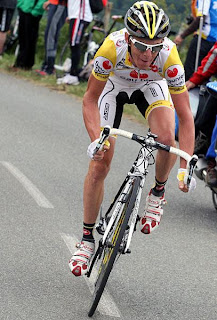 Getting closer to his 2nd win at the Tour.
The Cobra strikes out alone to Bagneres-de-Bigorre.
www.cyclingnews.com
Team Garmin-Chipotle: Groovin!
I wanted to mention one of my favorite riders, Maggy Backstedt dropped off the back of the peloton finishing 4 minutes outside the time limit. That was on yesterday's stage 8. The big Swede will be missed!
Team leader, Christian Vande Velde finished a strong 20th, 1'57" back and now lies in a well deserved 3rd overall. Kudos to the rest of the team with special emphasis on Canada's Ryder Hesjedal, 78th 9'04" back. Hesjedal is the 4th Canadian to ever ride the Tour and the first in more than a decade. That's a long time coming. Alex Steida, Steve Bauer and Gord Fraser weere the other Canucks. Hesjedal spotted a Canadian flag hanging from a balcony off a farmhouse during stage 5 from Cholet-Chateauroux.
"That was cool. They(Canadian fans) are out there." And when asked about his first Tour. "It's crazy. There were people lining the route the whole way. From the yards in the towns and villages to the rural fields, there is not a moment  when the route is not lined with people," says Hesjedal. After todays stage, look for Hesjedal to climb up in the standings. He's in 82nd overall, 37'30" back.
Grimpeurs Ryder Hesjedal Tour de France