Second win for the man ... from the Isle of Man! 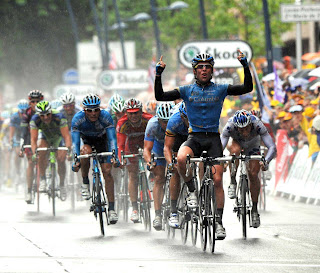 Thanks for the win. Cavendish the 'Cannonball' charges to win in Toulouse.
His invaluable Team Columbia teammates helped him win his second Tour stage!
www.cyclingweekly.co.uk
Young, über-sprinter  23 year old, Mark Cavendish(Team Columbia) does it again. He beat a hot field during todays cold & clammy  172.5 km stage. 8 into Toulouse. He did it in frightful conditions on a rain swept course. After watching Riccardo Ricco(Saunier) fall I was ready for more. I swear that on the final tight corner the peloton would fold like a house of cards. But, these professionals approached it gingerly and snaked around the corner without incident. With the Tour stage win, Cavendish equals his Giro two stage victories. This man is going places, fast!
One guy that almost came through was Frenchman, Jimmy Casper(Agritubel). He charged to a splendid 3rd place. He's one of my favorite sprinters along with sentimental favorite, Erik Zabel(6th today, Team Milram). I still believe that the on form Zabel can get a stage win before it's all over. This will be his last Tour. And, having reached  the ripe age of 38 on July 7th,  a late birthday present is still in the offering.
sprinters Tour de France

Groover said…
It was nail bitingly exciting. I was glued to the TV. What a powerful finish! Loved it.

Richard said…
Amen to that! The mountains will separate the contenders from the pretenders. It should be exciting!
July 12, 2008 at 11:46 PM