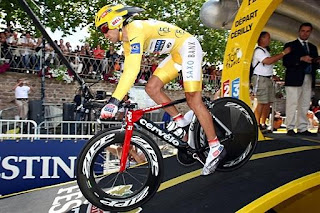 Sastre riding to history.
www.cyclingnews.com
They came and conquered.
Carlos Sastre's amazing time trial today gave the Spanish rider the Maillot Jaune and bearing any incident, the final ride to Paris as winner of the 2008 Tour de France. He's on the threshold to become the 7th Spanish rider to win the Tour. His compatriots are:
1. Frederico Bahamontes - 1959
2. Luis Ocana - 1973
3. Pedro Delgado - 1988
4. Miguel Indurain - 1991-95
5. Oscar Pereiro - 2006
6. Alberto Contador - 2007
Sastre summed it up best after the time trial, "I was calmed, I was  relaxed, I knew it was the chance of a lifetime. I think I deserved it."
It's definitely the beginning  of a  Spanish renaissance applauding the last 3 winners of the Tour from Spain.
And better yet, three-time world champion, Oscar Freire will celebrate as the first Spanish rider to claim the Maillot Vert. 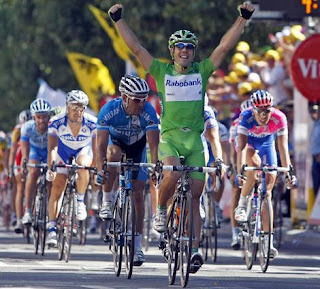