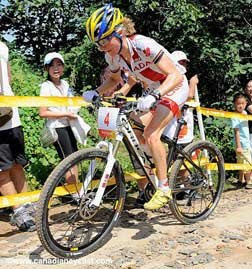 Riding well & looking strong in the Olympic MTB race.
Catharine Pendrel keeps up the pace in Beijing.
www.cyclingnews.com
Marie Helene Premont dropped out of the Olympic x-cross country race after the second lap. It seemed Canada's medal hopes were dashed, or was it? Enter the plucky Catharine Pendrel, having won her last World Cup race early August in Bromont, Quebec tore up the course to finish a strong fourth. With so many top athletes going for the medals, Pendrel made us think again how finishing outside the medals can be a personal victory...

"Irina (Kalentieva) and I were together for most of the last lap. There was one little 'popper' climb before the final desent, and I made an error there. I tried to downshift to my granny gear on the steepest part, and had to put my foot down, and that's when she got by me. It hurts, but it's still a fantastic ride for me, and I feel that I didn't lose third, I won fourth."
I love her attitude!
Inspiration Marie Helene Premont Mountain Fever MTB World Cup XC Olympics