"Be strong, ride in front, and have a little luck." 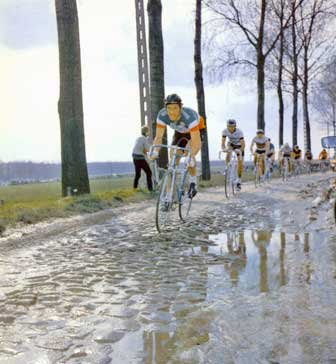 Enjoying Hell.
Moser living by his words, 'be strong, ride in front, and have a little luck.'
Wearing the Italian tricolor jersey he'll proudly win his third Paris-Roubaix and enter the history books.
From: 'The fabulous World of Cycling.'
Moser's Love for the Cobbles x 3!
Francesco Moser, 'the sheriff' had tremendous strength over the cobbles. He was built for it, muscular and almost to big for the high mountain's of the Grand Tours, he excelled in the classic arena. Moser had an impressive palmares with major victories in; 1977 Worlds, Giro d'Italia, two Tours of Lombardy, Milan San-Remo, Gent-Wevelgem, Fleche Wallonne and three wins of Paris-Roubaix. His favorite race by far.
If you ever watched him, he seemed to provoke the race by his sheer, sustained crazed rhythm dominating the cobbles. Like floating power. When I watch him on, 'A Sunday in Hell,' it's utterly amazing how much insane power he had. Most of the other riders were hard pressed just to keep up. He was the quintessential Italian rider with style; innovative equipment & clothing, quiet spoken, generous-hearted, a gentleman off the bike. When he was on it he was simply... an animal. Even the Badger treated Moser as his equal--Hinault had very few equals.
In 1974, he entered hell for the first time and enjoyed it so much he finished second. "At last. I knew it! I knew I would win it one day. It's my kind of race. I discovered that in 1974, when I first completed in Paris-Roubaix. To win here is a dream, and one that will never be repeated," he predicted. Two years later, in 1976, second again on Jorgen Leth's famous film, 'A Sunday in Hell.' This tortuous race was his calling. It suited his consistent robust style over the cobblestones. Then he did it in triumphant succession; 1978, 1979 and 1980. On all three occasions he was able to finished splendidly alone. After his second win he proudly said, "excellent for our national prestige." And proud he was as he had the gypsy, Roger De Vlaeminck to defeat. With his third win he entered as cycling demi-god tying Frenchman, Octave Lapize (1909-11) for three consecutive victories. This record still stands.
He once said about riding hell very humbly; be strong, ride in front, and have a little luck.
Nothing to it... for 'the sheriff' of Roubaix! 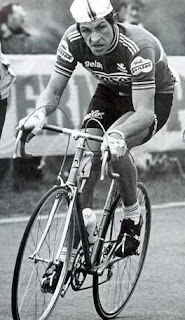 The Sheriff's in town.
From: 'Kings of the Road.'
Francesco Moser Italian riders Paris-Roubaix

Thanks very much. Imagine falling on those cobblestones strapped to the pedals!
September 22, 2008 at 1:35 PM