Behind the scenes with Moser's Italian flare! 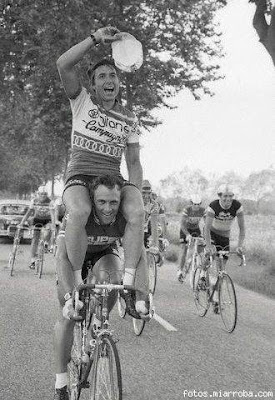 A domestique's job is never done!
www.trotabici.com
I don't know who these two riders are but I love this image. The 1975 Tour de France was a very serious battle as Bernard Thévenet dethroned King Eddy Merckx for the overall.
With every drama there's also a moment of light heartiness.
Francesco Moser's first and last Tour: 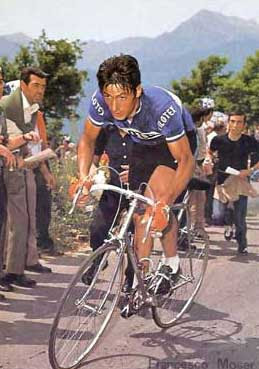 Youthful vigor. First Tour, big hurt.
Cecco finding it hard up in the French Cols!
www.cyclingwebsite.net
Francesco Moser, 'Cecco,' started the 1975 Tour de France, his first, with anticipation. Riding for the Italian Filotex team he had a good start to his third season almost winning Milan San Remo behind Eddy Merckx. He was close again finishing second behind Bernard Thévenet at the Criterium du Dauphiné Libéré. But, there was a doubt. He never rode the Tour de France and the mountains look daunting to him. He was always a strong rider on the flats but when the road rose upwards it revealed his true weakness. He was a big man with awesome strength and he knew that it was a challenge to haul his physical bulk over the mountains.
The prologue was the best stage to make his mark. It was a short TT, 6.250 km centered in Charleroi, Belgium. The twenty-four year old Trentino won beating Tour toughmen; Merckx(2nd), Van Impe(3rd) and Pollentier(4th). Winning the stage gave him the Maillot Jaune and plenty of confidence which he astoundingly kept until stage 5. And then there was a worthy opponent in Merckx to take it away from him. To say that Moser's first Tour was a success was an understatement. He proved that he could ride well enough to challenge for the points competition. He returned on stage 7, a long one of 235.5 km to win his second stage outgunning fellow sprinters' Van Linden, Godefoot and Merckx.
Then came the mountains. And in succession he met each climb, unruly as they are. He did well to limit his loses and finished relatively well in the standings. But, deep down he didn't enjoy the mountains it never suited him. Moser was suited for the sprints and did so well that he finished 3rd in the points classification. This Tour marked the introduction of the Maillot Blanc or best young rider. And there emerged the class of a talented rider for he became the first to wear and win the youth classification jersey. He finished in seventh place overall, a fantastic 24' 13" behind.
To think that Francesco Moser rode into Paris at the first ever Tour finish on the Champs-Elysées wearing the Maillot Blanc was partly anticlimatic. Sadly, the great man never returned to ride the Tour again. 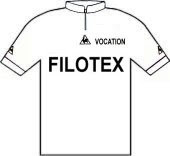