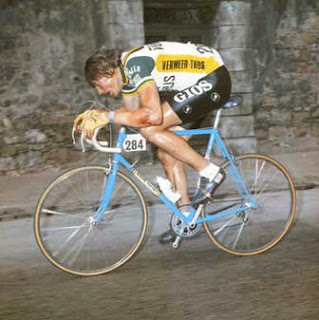 Classy form.
Fons De Wolf escaping on his way for a huge victory at the 1981 Milan -San Remo. He'll finish splendidly alone!
From: 'the fabulous world of cycling.'

During his eleven year career, Alfons (Fons) De Wolf won two prestigious victories that in a way launched him in the eyes of Belgium fans & media, as the next... Eddy Merckx.

To close out the 1980 season, he won the Giro di Lombardia. The following year, the Primavera, Milan San-Remo was his next goal. He won with such class and panache that folks were already saying that he was the worthy successor to Merckx (since retired in 1978). Although he won Het Volk twice, De Wolf enjoyed the Italian hillier races more so than the other great classic races. Years later, he won one stage each in the 1984 Tour de France and 1985 Vuelta and soon faded.

Was this an unfair comparison? No one could win the sheer quality of races that Merckx did. The Cannibal holds the untouchable record of seven Primavera wins. Fons De Wolf never liked the pressure heaped onto him. He was an excellent rider but not another Eddy Merckx. And, with the rabid Belgian fans used to winning, the pressure expected on him was too much.
He retired in 1990 and became a funeral director in Belgium. 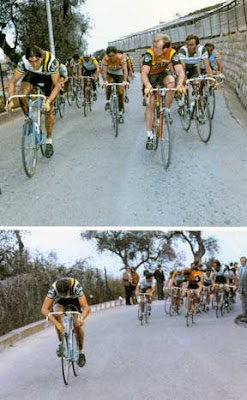 Panache at the 1981 Primavera.
De Wolf attacking with 200 meters before the Poggio. He was so strong no one could respond.
From: 'the fabulous world of cycling.'
Milan-Sanremo The Monuments

Folding Ben said…
Great post! I love the information you present. It's biking at its best witha a nice flare!
September 29, 2008 at 9:54 PM