Running of the Bull. 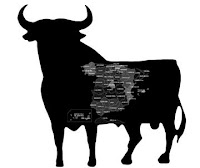 It's not Pamplona but it was close to it!
Alberto Contador won the tough uphill Stage 13 to Alto de L'Angliru in his patented fluid style of attack. I had a look on various cycling sites and caught the last 4 km's action. I was amazed at how easily he climbed up the last 2 km's. Dancing, literally, on his pedals the twenty five year old out distanced himself from rival Alejandro Valverde and the rest for the win.  He was a 'Bull of a rider' on todays stage and now has the Jersey de Oro. With a week left, Contador looks closer to becoming the fifth rider in history to win all 3 grand tours! 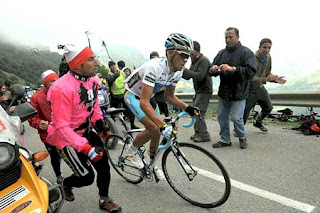 Like the proverbial bull running through a china shop.
Contador in first and flying up the very steep Angliru!
www.cyclingnews.com
Vuelta a España