Taking the Reynolds out for a ride! 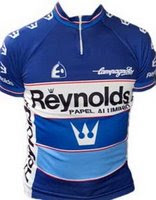 My Reynolds Papel Aluminio jersey from 1984.
As I step out this morning, I put on my Reynolds Papel Aluminio jersey. And I felt a little inspired...
This is the one I bought back in Treviso, Italy back in 1984. I'm still wondering how it still fits me. I have a team issue jersey and it's made extremely well. It was starting to warm up as I went for an hour and a half spin. Out and back by the University, I ended up exhausted fighting the cross winds. I cracked a smile as I got off the highway and away from the wind.
With the jersey on, I thought back to the 1984 Tour. In particular of Reynolds classy rider Angel Arroyo. The year before, in 1983, he battled well to finish second overall. Grabbed his very first stage win, the TT up the Puy de Dome. Only Laurent Fignon stood in his way. Arroyo returned the following year and won again. This time on the grueling stage 19, La Plagne-Morzine. He went on to finish sixth overall falling short from his second place in 1983. He did challenge for the mountains classification coming in a fine 3rd. Though he did well, this was his second and last attempt at the Tour de France. A very good rider, indeed! 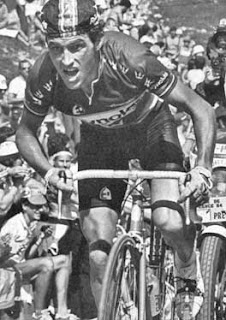