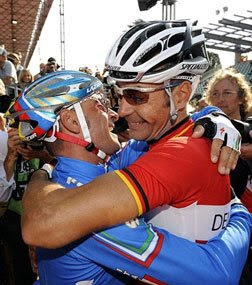 Warm & fuzzy before the race.
Bettini and Zabel grab each other one last time
ww.cyclingnews.com
The World’s are now over. And the Italians did it and almost made it a clean sweep. Favorite Paolo ‘the Cricket’ Bettini tried to defend his rainbow jersey but ended up graciously handed it over to his teammate, the well deserved…Alessandro Ballan.
Bettini wanted to keep that rainbow jersey one more time thus becoming the 5th rider to take the coveted title three times. Instead the 34 year old bowed out and retired from racing. He finished 28th. One of my all time favorite sprinter’s, Erik Zabel(38 years), will call it a career at the end of the season. He finished 29th.

Another rider that gave his all was Canada’s Michael Barry. He looked good, unfortunately flatted yet fought his way back to finish in 33rd. Hardly the result he wanted when you are left without team support. His two teammates dropped out.
The Italian squardra showcased their deep road talent. Damiano Cunego took silver and Davide Rebellin missed out on the fun to claim a close fourth. Dane, Matti Breschel came out of nowhere to take the bronze.

Winning the World's in cycling mad Italy has plunged Alessandro Ballan an instant hero. I’m sure the party's just started! 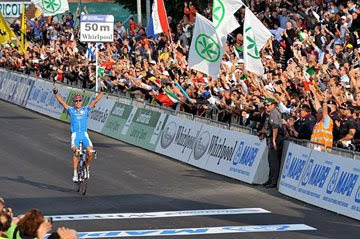