He'll drink to that! 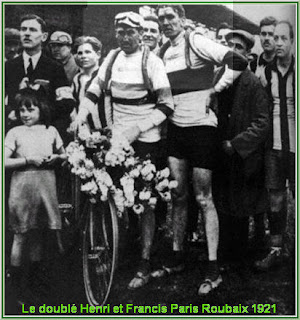 Francis(right) was so strong he took second behind his brother, Henri at the 1921 Paris-Roubaix.
http://lepetitbraquet.free.fr/chron7_pelissier.htm
On the eve of the 102nd Paris-Tours, here's an amusing anecdote.
The 1921 Paris-Tours race was as harsh as it can be, cold with blizzards. French national champ, Francis Pelissier punctured and with hands so cold tore the tire off with his teeth. Riding on the rim he soloed to victory! Now how did he win? It turns out that, the night before, Francis the Great consumed a pint and a half of rum before his hard earned win.
This just adds to his legend!
fun