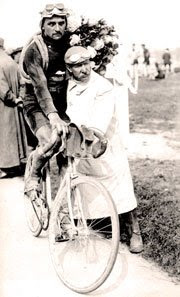 The Friendly Giant after winning the 1909 Tour.
From: 'The Official Tour de France.'
Francois Faber, the great Luxembourger, won the very harsh 1909 Tour de France. At close to six feet tall and almost 200 Ibs this man was called, ‘Giant from Colombes.’

This Tour was brutal full of cold, mud, wet with snow. Faber was extraordinary as a rider toughen as a labourer to withstand the gross weather conditions. His ox like frame really was made for the punishing roads to Roubaix. He won stage two and the next four stages. (A few years later, he would win the 1913 Paris Roubaix.) Faber was unrelenting on the flat roads gritting his teeth and just pounded his pedals to victory. A toughman for the pavé to be sure. The third stage to Belfort was appalling which he took to his advantage by winning after a 255 km solo breakaway through snow.

But, what I found heart warming was that the tough Faber was indeed, a friendly giant. Starting in 1906, rules forbade riders to share tire pumps. When Faber saw a fellow rider without a pump or inner tubes left he would discreetly drop his pump on the side of the road so the other rider would not be penalized.
Which goes to show that nice guys do finish first!
Vintage Tour de France

Groover said…
It must have been a very cold year with snow on the stage to Belfort. Crazy. Thank you again and again for bringing cycling history to life.
October 10, 2008 at 9:05 PM