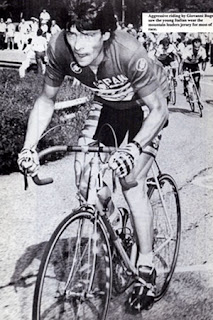 First year Pro, his first Giro.
A determine Bugno attacking and wearing the mountains jersey at the 1986 Giro.
From: 'Tour 86.'

Twenty one year old, Gianni Bugno started out as a Stagiaire for the Atala-Ofmega Italian team in 1985. What is a Stagiaire, you say?

French for trainee, a younger rider that a team takes on in the later part of the season. Two reasons for it, the team wants to see how the promising rider gets on with the team. Or, they need to round out the roster due to injury or fatigue. In the hard school of cycling, it’s valuable work experience for the Stagiaire. Here, it’s the perfect apprenticeship, learning the basics of team riding in a professional team. The ultimate benefit for the Stagiaire is that the team will sign him to a contract.

Gianni Bugno was a Stagiaire no more, he was signed by Atala-Ofmega for the 1986 season. He started to win races… though small. His first pro season saw him rack up three wins: Giro dell’Appennino, Giro di Friuli, Giro del Piemonte. Then came his first big test as the Atala team leader at the 1986 Giro d’Italia. He fought well finishing in 41st overall, second overall in the mountains competition and tenth in the young riders competition.

It was a hint of things to come!

Coming Soon: With a little help.

Inset image: The youthful Bugno in the classy stripes of the 1986 Atala-Ofmega team.
www.cyclingwebsite.net