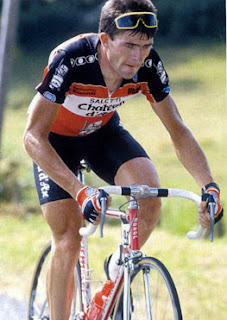 A well timed breakaway move.
Bugno on his way to his first Tour stage victory to Limoges.
Offside/l'Equipe.

Gianni Bugno was one of the most talented riders to come out of the nineties. One of the last all-rounders capable of success in the Classics, stage & one-day races. He was an immovable force with plenty of strength & endurance, great climbing ability, time trialing speed and quick recovery. Although he raced and won with panache,  he also had a little help.

During the late eighties, the dynamic yet introverted Bugno won only small races. Although he started to show promise with minor wins, he had yet to win the big one. At the time, he didn’t know that he was dizzy with vertigo and a fear of falling when he descended from a mountain at high speed. At the 1989 Milan Turin race he revealed how he was easily caught on the descent. “I felt so dizzy that I slowed down almost to a stop,” he said. At the 1988 Giro a frightful crash caused him to abandon. And as a result the problem stemmed from a congenital obstruction in his inner ear.

In 1989, help came with a month of unusual musical therapy to cure the vertigo. Bugno was found to be allergic to wheat and milk products. His diet was quickly changed. And if that wasn’t enough, he saw a psychologist about his shyness. The problem was traced back to his early childhood,  brought up by his grand parents in Italy while his parents worked in Switzerland.

With his ailments under control, Bugno approached the 1990 season restored with new vigor. Like a cat let out of the bag, he was on the offensive and won his first prestigious Classic, Milan–San Remo. And he won it descending confidently down the Poggio to an historic victory. Next was a dominating ride in the Giro. He lead from start to finish, wearing the Maglia Rosa and using his new descending skills in the mountains to glory. He won by over six minutes from second place rider, Charly Mottet. The Tour was next and he won two stages on the famed Alpe d’Huez & Bordeaux stages. He achieved seventh overall, a resounding success and showed his enormous capabilities. A win at the Wincanton Classic was his and a remarkable ride sprinting for third from a fast charging Greg Lemond at the World Championships in Japan capped off an incredible summer.

‘Il campione si sveglia’, The champion awakes’ was the headline on an 1990 Italian magazine. 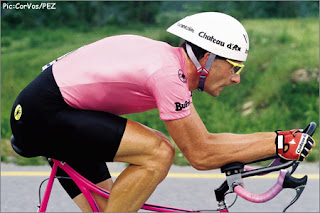 Maglia Rosa from start to finish!
The re-vamped Bugno on his way to total control of the 1990 Giro.
Winning three stages and finishing second on four others produced a new confident hero!
Gianni Bugno Italian riders

Ron George said…
Hey, something else few people know about him is that he listened to Mozart's music to cure his fear of heights.