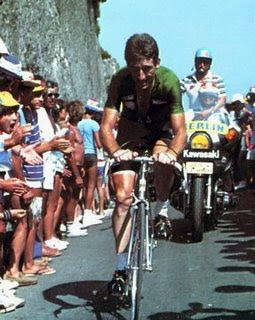 Before...
Sean Kelly: intense riding with his second Green Jersey at the Puy de Dôme TT.
From: 'Tour 83.'

At the 1985 Tour, a technological 'French' revolution began...
Look was at the forefront with their clipless pedal and launched it at the biggest race in the world.  It was Bernard Hinault who was the one to use a prototype Look clipless pedal. A great marketing ploy two ways; for his involvement at the French ski-binding company Look with a one-click efficient pedal system and at the same time introducing the new Bernard Tapie backed international, powerhouse squad La Vie Claire-Wonder-Radar. As we know, Hinault won his record tying fifth Tour and  changed cycling pedal design. Soon afterwards, most riders adopted the new pedal system except for a small group of mavericks.
One prominent rider  decided against it. He was one of the last roadmen to use toe-straps... Sean Kelly.
His almost spartan approach to cycling endured him as the original hardman of cycling.  He won virtually all of the Classics, except for Flanders, four Green Points Jersey's, two Tour de Suisse, a Vuelta d'Espana, and numerous other Classics. They didn't call him, 'King Kelly,' for nothing. His 193 professional wins was second only to Eddy Merckx. In the early nineties, toe clips & pedal straps could still be seen in use, but on the decline. I will always remember seeing a post race photo of his massive, muscular legs with duct tape secured around his cycling shoes.
Never one to bow to pressure, the irrefutable Kelly once said, "I always felt comfortable with the toe-straps."
No question about that! 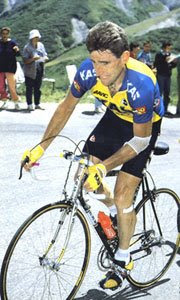 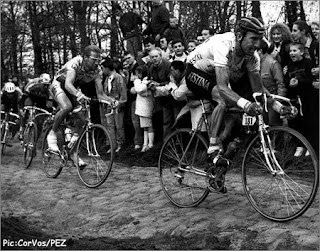 Years after...
With his toe clips, hard at it. 1992 Paris-Roubaix.
www.pezcyclingnews.com 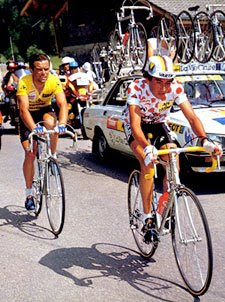 Hinault with Herrera.
The Badger pioneered the first Look prototype clipless pedals at the 1985 Tour.
From: 'Tour 85.'
Gear and Equipment Sean Kelly