Jeannie vs the Soviet Machine. 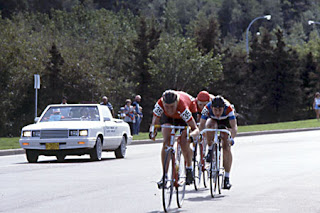 On the final entrance into Hawerlark Park, Edmonton.
Longo and the two Soviets, Kibardina(#35) & Polyakova keeping the suspense high.
Once again, I've research my film archives and rediscovered quite a selection of imagery from the 1983 Summer Universiade games. Here's three more from that exciting race.
The former Soviet Union was represented with a very strong team that produced an even stronger... one, two finish. The Soviets made it imperative to do well, on the world sporting stage. They considered sport achievements as the perfect way to show the advantages and power of the communist state. With the support from very good sport programs, produced many medal winning performances. In fact, the Soviet sports machine won the overall medal count with a total of 115.

A 1962 Soviet poster with the slogan at the bottom: "A Mighty Sports Power!" 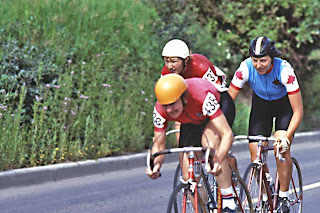 The Soviets work well together, boxing in a lone Canadian.
I love the old Colnago & track helmets!
You'll notice the bleu, blanc et rouge jersey of a youthful, twenty-five year old Jeannie Longo in the mix. It was my first time seeing Longo and from my memory of the race, she had the stamina and not quite the strength to beat the tough Soviets. The odds were against her. But, the way I look at it, she won. Because I'm sure she's the only one of the three to still be riding, today! 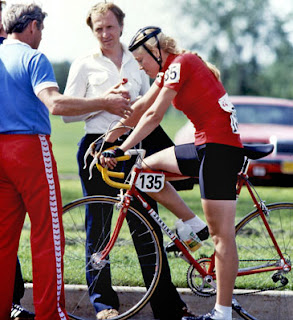 The stunning winner, Nadezhda Kibardina of the Soviet Union on her Sannino steel bike.
I managed to photograph her right after the race. And, I can tell you that she was hardly out of breath as she talked to her coaches.
Her fine victory was another example from the great Soviet sports machine!

Anonymous said…
I recently came accross your blog and have been reading along. I thought I would leave my first comment. I dont know what to say except that I have enjoyed reading. Nice blog. I will keep visiting this blog very often.