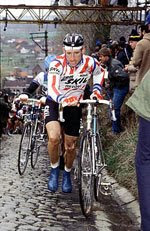 Sean Kelly's other forte was 'classic' running on the cobbles of Flanders, 1984.
Cycling classics is not only a sport of riding on the bike. The rider must make a supreme effort, even off the bike to get through a race. The Ronde van Vlaanderen  (Tour of Flanders) was the only 'Monument" classic that King Kelly did not win.
Of course, it never stopped him from trying.
In fact, this 'Monument'  is held in spring, a week before Paris-Roubaix. The tough Belgium course is full of steep short hills often with the famous cobblestones. This race especially with its sister race, Paris-Roubaix is made for the hardmen of the pavé. The 1984 edition was wet and dangerously slippery. Riders had to be especially adept in the art of running up the cobbles without falling. Kelly(Skil-Sem-Mavic) knew how to, but missed the overall victory, finishing a brave second. And, placing second was the best he could ever reach at Flanders(1984, '86, & '87). Dutchman, Johan Lammerts(Panasonic) won that soggy race... twenty-five seconds ahead of Kelly.
If there was ever one rider made for the cobblestone hardened classics... it was definitely Sean Kelly! 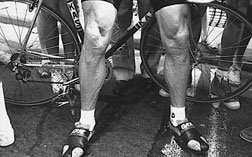