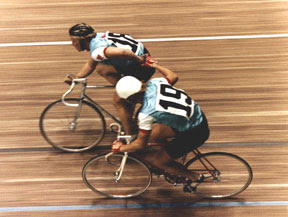 Two great Canadian cyclists: Gord Singleton & Steve Bauer(#19) in a Madison race.
www.gordsingleton.com
The other day, Hans commented about Steve Bauer's epic ride at the LA 1984 Olympics road race. Hans was quite excited, and with reason, that Bauer was riding on what appears to be a Colnago Master. It's the earlier cousin to the current Master-X Light. 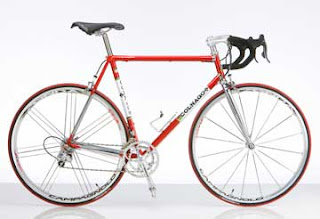 Hans Master-X Light.
Image by Hans.
Steve Bauer won that historical Olympic silver that eventually launched his European professional career. Little do most folks know, Bauer like many successful road cyclists, rode on the tracks. In 1982, he did very well and won the track points at the Canadian National Championships. That same year, at the Commonwealth Games in Brisbane, he just missed medaling coming 4th in the 10 mile track & team pursuit. Together, with world champion Gord Singleton,  they rode many track races in the early eighties. 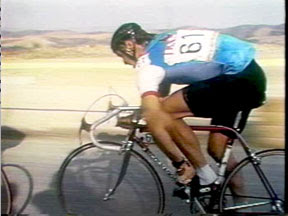 Prelude to greatness.
Bauer tightening up for the final surge.
At the 1984 Los Angeles Olympics, Bauer used his old Master Colnago friend for a silver victory.
From: 'Inside Out.'
Colnago Hans Olympics steel love Steve Bauer