Unsung heroes: THE voice of the Tour.

Here's another of my 'unsung heroes' of cycling. La voix du Tour, the golden voice of the Tour ...Daniel Mangeas.
The 59 year old former baker is the commentator of the Tour and various other races since 1974. He has an resounding & captivating voice, commentating at 200 events a year. His encyclopedic knowledge of each rider in the peloton is so vast that he never uses notes, working entirely through improvisation. For the breathless Mangeas, he must maintain a running commentary for at least an hour at the beginning and end of each stage. Quite an attribute.
Each time I watch and listen to him as on the great documentary, 'A Sunday in Hell,' Mangeas provides that special touch... that he's only capable of! 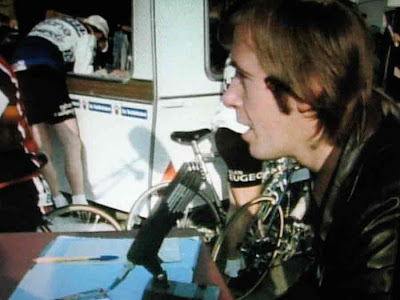 Groover said…
For a second I thought you were going to post about Phil Liggett when I saw the header.

Of course I've heard this voice thousands of times but had you asked me his name, I wouldn't have been able to tell you. Now I will. Thanks for posting the video about Daniel Mangeas.
December 20, 2008 at 6:51 PM

Richard said…
Phil Liggett is one of the best commentators... Daniel Mangeas is an institution!
December 20, 2008 at 7:34 PM