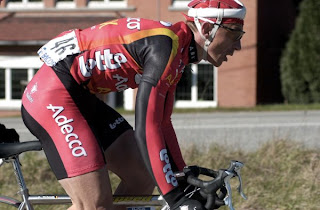 Classic style with hairnet.
Tchmil during his last season at Het Volk, 2002.
His swan song finishing a strong seventh.

This Saturday marks the exciting start to the Classic season, with the 64th Omloop Het Nieuwsblad (I like the old name, Het Volk).
With Spring not too far off, there's something positive about a new season. New teams form providing a refreshing change for new riders. Optimistic veterans mark it as a renewal toward a new season. One thing that never changes, thankfully, are the infamous pave sections and the unbearable weather conditions that provide the right adversary for the riders. What's a Classic without it?
This Belgian semi-classic first started in 1945 and cancelled due to snow (in 1986 & 2004). Snow did fall on the evening of the 1955, 1974 & 1988 editions but it was given the go ahead. The tough Belgian riders have dominated winning this great race 53 times.
Russian turned Belgian,
The old school pave pounder...
One of my favorite all time classic riders is Andrei Tchmil; Russian by birth but Belgian by passion and citizenship. Back in 1989, with the collapse of the Soviet Union, the talented rider turned pro with the Italian Alfa Lum squad. He soon moved to Belgium and developed into a famous classic specialist. A tenacious rider, he flourished in the Classics with monumental wins in Milan Sanremo, Paris-Roubaix & the Tour of Flanders. Coming close to winning Het Volk, he finished on the podium in third place (1995 & 1998).
His signature winning look: a powerful riding style finely honed for the pave and wearing his distinctive old style 'hairnet'. 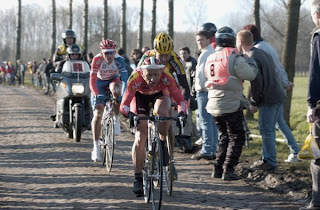 Monsieur Pave.
Andrei Tchmil, at the front and going for it.
Het Volk, 2002.
All from: www.cyclingnews.com
My pick: Cervelo Test Teams' Thor Husovd looks prime, with the help from teammate Dominique Rollin, for victory!
Inspiration The Classics