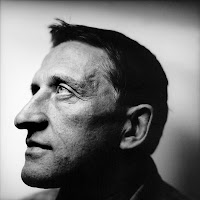 Freddy Maertans.
From: Stephan Veanfleteren, 'Flandrian.'
The 'Ogre' looked the favorite at the start of the 1977 Vuelta a Espana. Why? The previous year, he tormented the peloton by  racking up 54 victories including; the World Championship road race and  Tour de France (8 stages, green jersey, & 8th overall). Even Eddy Merckx confessed, "Maertans was the strongest in the peloton!"
He looked very confident as he started the Vuelta as numero uno, the favorite for the overall. Spanish organisers were pleased to secure the sprinter extraordinaire, although the rest of the riders already knew that the race was for second. His domination was supreme and superb as he rode away taking a record 13 stages including  points classification and overall. He surpassed the old record of Rik Van Looy's eight stage victories from 1965. What do they say, records were made to be broken?  And, the Ogre had helped from his strong Velda-Flandria team and friend, the quirky & talented Michel Pollentier.
This Friday, the great Belgian sprinter perhaps the fiercest of all, turns 57... Bon Anniversaire Freddy!

1977 Vuelta a Espana.
Everyone could only follow as Maertans (orange leaders jersey) rides
to claim a record 13 stages! 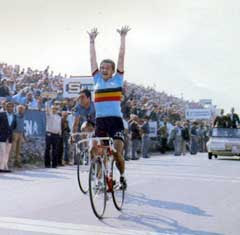 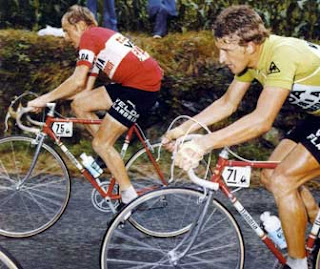