Throwing the dice, 25 years ago... Fignon vs the Giro. 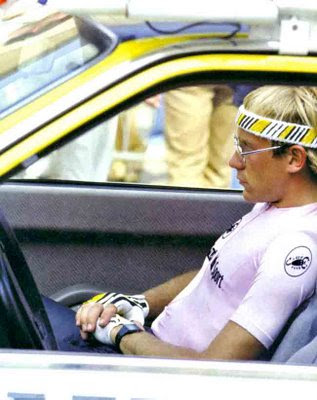 Laurent Fignon lost in his thoughts before the
final ITT!
Offside/L'Equipe
The 1984 Giro d'Italia was the race that Italy wanted either Francesco Moser or Giuseppe Saronni to win. Until Frenchman, Laurent Fignon decided to roll the dice...

Craps,
Snake eyes!
That year a fit Moser had already broke the world hour record and dutifully won Milan-San Remo. A fitter Laurent Fignon approached the Giro as the previous year's winner of the Tour de France. He was the favorite non-Italian for the overall and the organizer, Vincenzo Torriani, knew.
French journalist Pierre Chany said, "Torriani had drawn up a fairly flat course of the sort, it was said, to favour either Saronni or Moser." One things for sure, Italians do like Italians to win their home Giro.
For the first 32 years, only Italians won. However, Swiss star Hugo Koblet upset the balance by winning the 1950 race. Vin Denson, in 1966, was the first Briton to win a stage and said, "The Italians would come out and push you in the mountains, but rather than actually pushing you, they'd be pulling you back or pulling on your brake cables so that your brakes rubbed. So you'd not only be delayed, but you'd be penalized as well. And when we were chasing Gianni Motta through Naples, they were chucking rubbish at us from balconies-tomatoes, spaghetti, old newspapers, anything." Phil Anderson said of the Giro organizers, "The organizer was a guy called Vincenzo Torriani. He had a way of doing things to make sure there'd be an Italian in the lead. You'd be due to ride some huge mountain pass and suddenly you'd find it had been shortened or that the course avoided the mountain."
The Infamous Stelvio switch...
The Stelvio climb is the third highest pass in Europe, and rises to a whopping 2,758 metres with a 24km climb at 8 %. It's set in northern Italy, between Milan and Innsbruck, on the Italian border. At this height snow is common.
And, here's where the news is dicey. Organizers reported that either the roads were clear or that they could be made clear with a snowplow. But, an official had said the road was impassable and had to be rerouted. The organizers agreed. Fignon claimed the Stelvio road was clear. "They knew I was capable of winning the Giro and they made sure I lost. They knew Moser couldn't have followed me. He was being pushed all the time and he was never penalized. I got penalties. Everyone got penalties, but not him."
One French writer claimed that the staircase in his hotel was the hardest climb of the day. Others argued, including Renault coach Cyrille Guimard that Moser had been pushed half way up the easier Tonale climb by other riders, spectators and his brothers. Moser was to say, "The Stelvio is often closed for races. And how can he claim that he would have dropped me in the mountains and made me lose the Giro? The Stelvio was going to come a long time before the finish. We didn't do that, but we did two other cols instead and the day was just as hard, a very hard day." 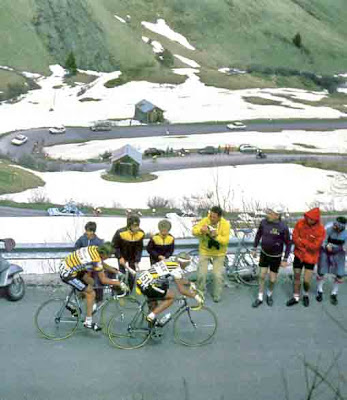 No Stelvio, here.
On the rerouted stage 20 to Arabba. Fignon(leading) & Johan Van de Velde took first and
second positions. With time bonus, Fignon was back in the lead
by 1' 36" with two stages remaining.
From: 'Tour 84.'
The final ITT to Verona...
Soave to Verona, 42kms not hilly but with a lot of twists and turns proved to be an electrifying finish for both riders. Moser chose his revolutionary time trial machine vs Fignon's conventional one. Moser gave all Italian fans a great stage victory by powering his way to Verona by nearly 2' 30". The impressive margin was good enough to clinch the overall classification by over 1 minute. Except, Fignon bitterly said, "It's very clear. The TV helicopter was flying just behind him. They are all from low down and behind him, so that the blades of the helicopter were pushing him along. Then look at the pictures of me and they'll all taken from in front of me, so that while the helicopter was pushing Moser along, it was pushing me back." Moser replied, "The helicopter simply couldn't have flown that low. It would have to have been just above our heads to make a difference." Nevertheless, Moser did win convincingly in 49' 26". His margin the biggest in recent memory for this final time trial. Fignon finished in 2' 24" losing the Giro. 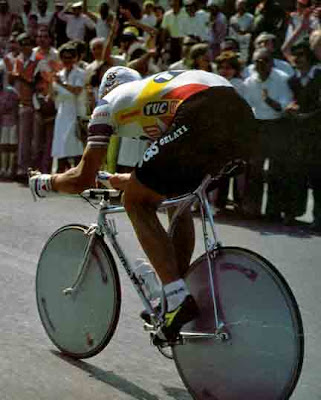 Moser on his revolutionary bike about to
blow away the field!
From: 'Tour 84.' 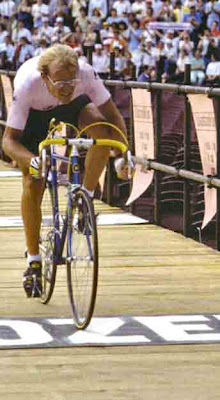 Fignon finishes the final ITT ...in second,
on his conventional bike and will lose the Maglia Rosa!
Was it a fair fight? We'll never really know. Good for the Giro, and the Italian fans had their number one win. But perhaps unfair for the disappointed Frenchman as he threw the dice and came up with ...snake eyes. He would have to wait five years later for his Giro victory! 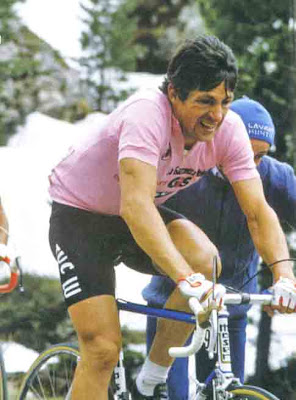 Up in the mountains.
Is that a push, Francesco?
Offside/L'Equipe
Francesco Moser Giro d'Italia Laurent Fignon