A look at Speeding Past! 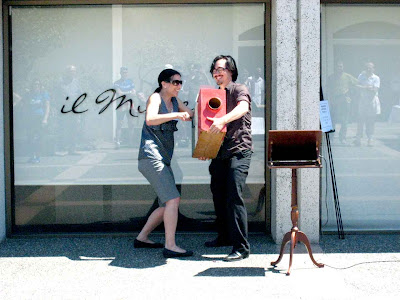 Opening ceremonies;
with the help from an traditional Italian hand crank siren!
How perfect it was today, sunny & warm somewhere in the late teens and with a nice spin in the morning out of the way. Carolle and I ventured out to the cycling exhibition, 'Speeding Past' (At the Italian Cultural Centre Museum, until August 5th). A rather nice table was set up with delicious pizza and other morsels to be had.
We met Guy and settled in for the opening monologue from the curator. He welcomed all of us and promptly skipped the last two pages of his prepared speech to usher us into the show. I talked to contributor, Fritz along with Paul, Dave & Brian of the steel bike club. Hans was not here as he was vacationing in France. With the formalities done, anticipation grew as we entered the Museum. 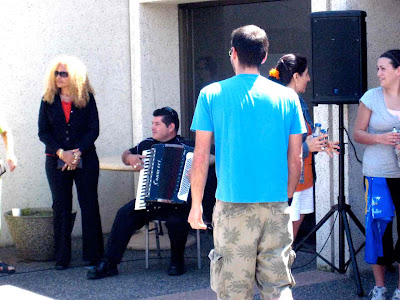 Let the music begin!
Many eye-catching bikes lined the room. Most from Felix (not present) & Fritz. What was wonderful was the large group of folks present. Owner, Giuseppe from Campione Cycles was present along with a striking, 'Camerotti Viadante' steel lug beauty decked out in Campy Centaur. I had the chance to talk to former bike racer, Bruno Tonietto who was the original owner of a beautiful 1974 Holdsworth track bike. He used to race it on the velodrome. Now, Fritz owns it.
Tonietto was a pioneer, one of the handful that had the great opportunity to race on the China Creek Track, here in Vancouver. It all started in 1954, as the city hosted the British Empire and Commonwealth Games. The China Creek Velodrome was built as a venue for track at the Games and cost $72,000. Located at Broadway & Glen Drive placed on a natural slope and centrally located it was thought to be ideal. At the time of construction the area was a natural gully and Broadway was raised on a trestle over a stream at Glen Drive. In 1980, the track was removed to make way for Vancouver Community College.
I talked to a volunteer who recited a charming story to us about her parents meeting at the track. Her mother would always go over to watch her father race. They eventually married and moved happily closer to the track.
Two hours later, it was time to go. We found it an enjoyable & informative exhibition on Vancouver's cycling past... except that by the time Guy and I stepped out for the pizza, it was long gone!
It was fun and I'll be posting more pictures in the days to come.
Forza Speeding Past! 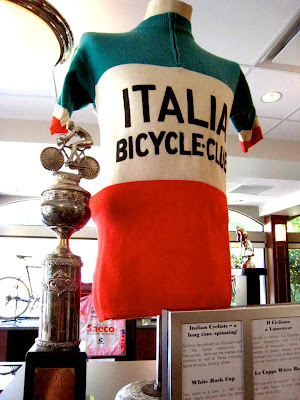 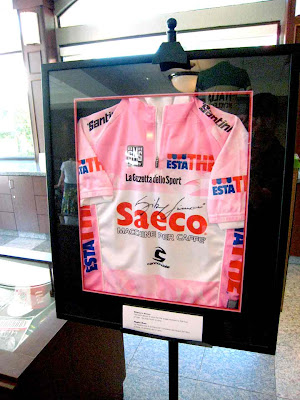 Is that Gilberto Simoni's 2003 maglia rosa? 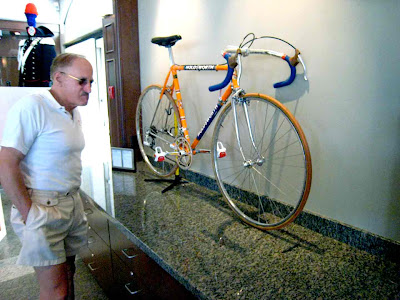 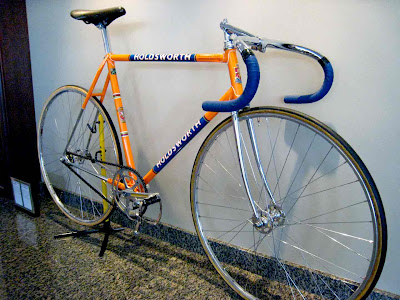 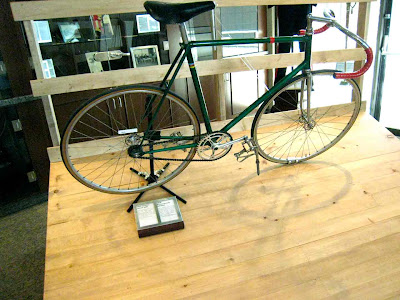 simon lamb said…
There is still one of those beautiful Holdsworth bikes in the window of their shop here in london. Another great post.
May 24, 2009 at 3:22 AM