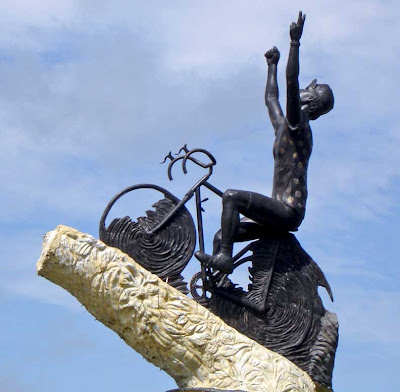 Winning on a high note!
Lucho Herrera's fantastic monument in his hometown of Fusagasuga, Colombia.
www.panoramio.com
Luis 'Lucho' Herrera was one of the finest grimpeurs to come from Colombia. He was the winner of five King of the Mountain Jersey's and the first South American to win a Grand Tour (1987 Vuelta a Espana). About a month and a half ago, a Columbian writer emailed me praising me on my posts on Lucho. He wrote an impassioned article on Columbian cycling, his love for Cafe de Columbia and especially on Lucho Herrera.

After watching this candid video, I can't help but question how a guy that look so fragile & thin can be a monster in the mountains? He was an utterly amazing talent and helped Cafe de Colombia 'rise' to majestic heights. After the 1985 Tour, rumor was that Bernard Hinault wanted KOM's Herrera for his La Vie Claire team. Even the astute badger knew. Herrera didn't acquire the nickname, 'The butterfly of the Andes' ... for nothing!
'
Colombian riders Grimpeurs Lucho Herrera video

simon lamb said…
thanks very much a really interesting post.