Bauer Power-ing to a new high! 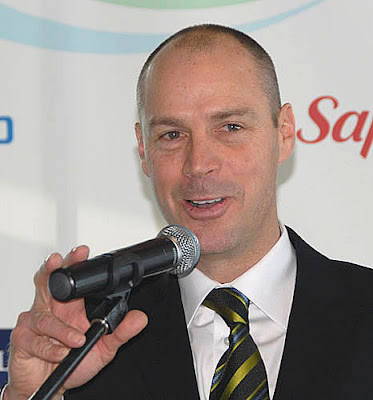 Ambitious and challenging...
Director sportif, Steve Bauer, aiming towards another Canadian high!
I remember that cool phrase, 'Bauer Power' written on placards as Steve powered his way through his first Tour de France for the La Vie Claire Team back in 1985. He definitely stoked Canadian cycling hearts as the first Canuck to ride the great race. He basically put Canada on the cycling map!

Steve Bauer is Canada's most accomplished cyclist wearing the maillot jaune for five days in 1988 & nine days at the 1990 Tour. Three time national champion, silver medal at the 1984 Olympics and bronze at the 1984 World Championships Barcelona.

Now, Bauer is director sportif of the Planet Energy team, formerly Team P.A.C.E. It's Canada's only UCI Continental Team driven by the passionate Bauer. Comprised of 14 Canadian riders: Olympians, Canadian champions and soon to be stars of the future. What a natural challenge for Bauer as he was an early Canadian pioneer for the sport competing against the European pros in the eighties. It has been a long time dream for Bauer to put together an all Canadian team to compete with the European elite. Ambitious is Bauer as this is part of a five year plan to get Canadians back to the Tour. Monetary challenges are often the case.

Bauer admitted, "We're on a tight budget of $700,000 CDN. Eventually we hope to have a team where everyone is paid a salary. To be one of the most competitive teams at our level in North America it would be $1 million plus because then we could acquire more of the top level Canadian riders. We have some of the best Canadians but we do not have all of the best. If we had all the best Canadians on the same team we could be competitive with some of the teams now in the Tour de France. That's what I want to do!"

It's a worthy testament to Steve Bauer that he has never lost any of his passion for cycling . I'm enthusiastic and probably not the only one, and I can't help but yell once again... "Bauer Power!"
Steve Bauer