A battle of attrition on Ventoux. 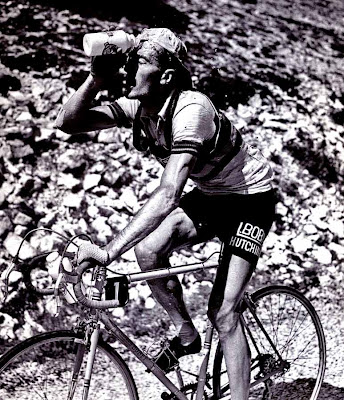 Maximum effort.
Bobet becoming a victim of Ventoux!
From: 'The Bicycle.'

With the upcoming Ventoux stage, I'm reminded of Louison Bobet's great ride up the Giant of Provence in the 1955 Tour. Remarkable was his middle name as he entered that Tour with one goal in mind, to win a successive three Tours. With one stage win already in his name, Bobet wanted badly to win atop Ventoux. The barren sun drenched upper slopes was dreadful. He was riding with an irritating & painful saddle sore. He passed Charly Gaul and stayed in the lead winning brilliantly. Ventoux was extremely hot as Jean Mallejac staggered and fell and passed out. Ferdi Kubler pushed so hard that his irrational ride forced him to seek safety in a cafe, got back on his bike, went in the wrong direction. He gave up after the stage and retired from cycling. Bobet won that hard stage & went on to be the first rider to win three successive Tours.
Later, in that year the Frenchman finally had relief and had his saddle boil removed!
Ferdi Kübler Louison Bobet Mountain Fever Vintage Tour de France