The Eagle of Toledo.

on July 10, 2009
Yesterday, July 9th was the 81st birthday of the great Spanish grimpeur, Frederico Bahamontes.
Today, looking quite lean & fit for his age the revered climber last won the 1959 Tour de France fifty years ago. Along with an impressive six KOM jerseys and tied with Lucien Van Impe, Bahamontes was a cyclist that flew when the mountains appeared. During the 1959 Tour, he took advantage of the friction in the powerhouse French team between Anquetil & Riviere. He led through the mountains riding against Charly Gaul and winning the time trial up the Alp d'Huez. Moving within four seconds of the maillot jaune, Baha looked a threat. He now had to attack under the guidance of Fausto Coppi his manager. He eventually took the yellow jersey and rode into Paris as the first Spanish rider to win the Tour and winning his second polka dot mountain jersey.
Happy birthday Frederico! 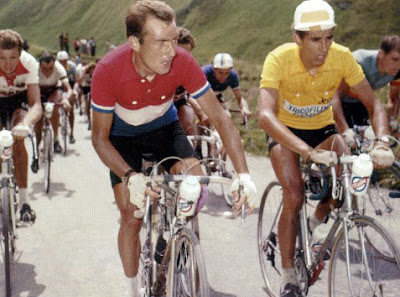